We've already had a look at Ubuntu in its 5.10 Breezy Badger version, but now we're trying a newer version (6.06 Dapper Drake) and a new flavour (Xubuntu rather than Ubuntu). What Xubuntu tries to do is make a lightweight, less resource-hungry version of the popular distribution, tailoring it for the needs of older hardware. It does this by using the Xfce desktop manager instead of Gnome, and limiting the applications to less resource-hungry alternatives.

Since the decommissioning of Windows 98, there are now a sizeable number of older machines without an adequate support for their operating system. Without patches for security issues, there will be a gradual push to migrate systems, and if the hardware can't support today's heavyweight (not to mention pricey) upgrades, there's a niche waiting for a fully-featured, fully-supported yet not too demanding operating system. And that's the gap that Xubuntu is excellently positioned to fill.

From the xubuntu.org site, the "Download" link takes you to the main download page where you can choose from desktop or alternate, i386, powerpc or amd64, and http, torrent or jigdo. The i386 desktop version is probably the one you want, so go for the file xubuntu-6.06.1-desktop-i386.iso.torrent.

As with all the other CD downloads, it makes sense to verify the Md5 checksum before burning (see the downloads section for the jar). This time I tried burning to CD-RW instead of CD-R, just to see if that also worked.

A few minutes later, and it's ready. Now just reboot and select to boot from CD.

Departing from the warm brown and orange tones of Ubuntu, this Xubuntu theme is a cool fresh blue, with crisp text and attractive icons. It doesn't look quite the same as KDE or Gnome (or E) but it's not as plain as expected, not unfamiliar and it's easy to see what's what. A pleasant surprise for a distro with a 'budget' audience. 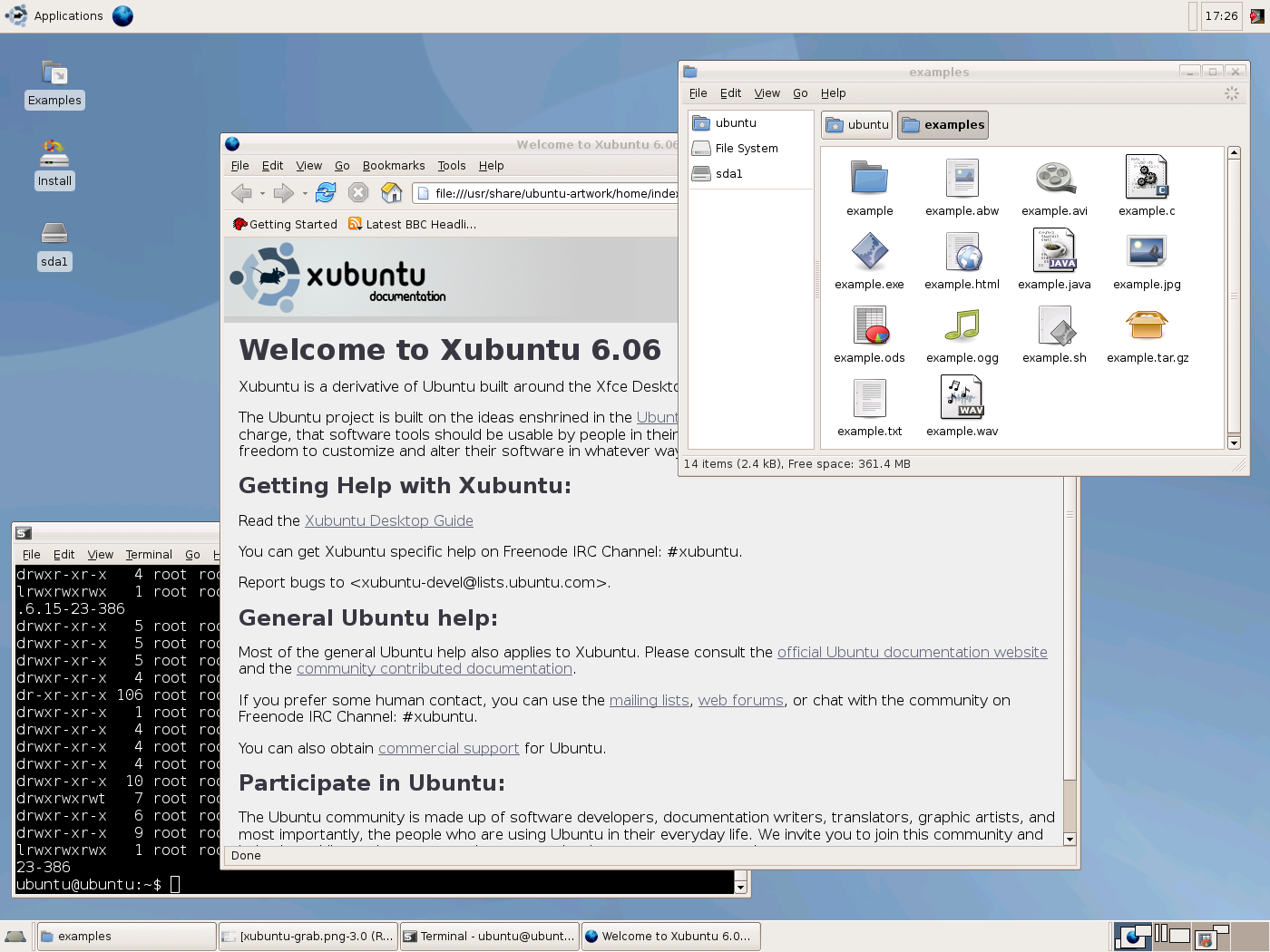 It still has a split menubar, with the taskbar along the bottom of the screen and the menubar (including clock) along the top. As with Ubuntu, the main application menu is in the top left, and is a sensible two levels deep. It's not chocked full of applications, but the important basics are all there. In the bottom-right corner of the screen is the desktop switcher, allowing you to have different applications open in each of the four different desktops and switch easily between them.

As you can see in the grab above, Firefox comes as the standard browser. Also shown above are a file manager window showing a few examples of the look and feel, and a console window. For an editor, it doesn't have Kate or gedit, but a basic editor called mousepad. 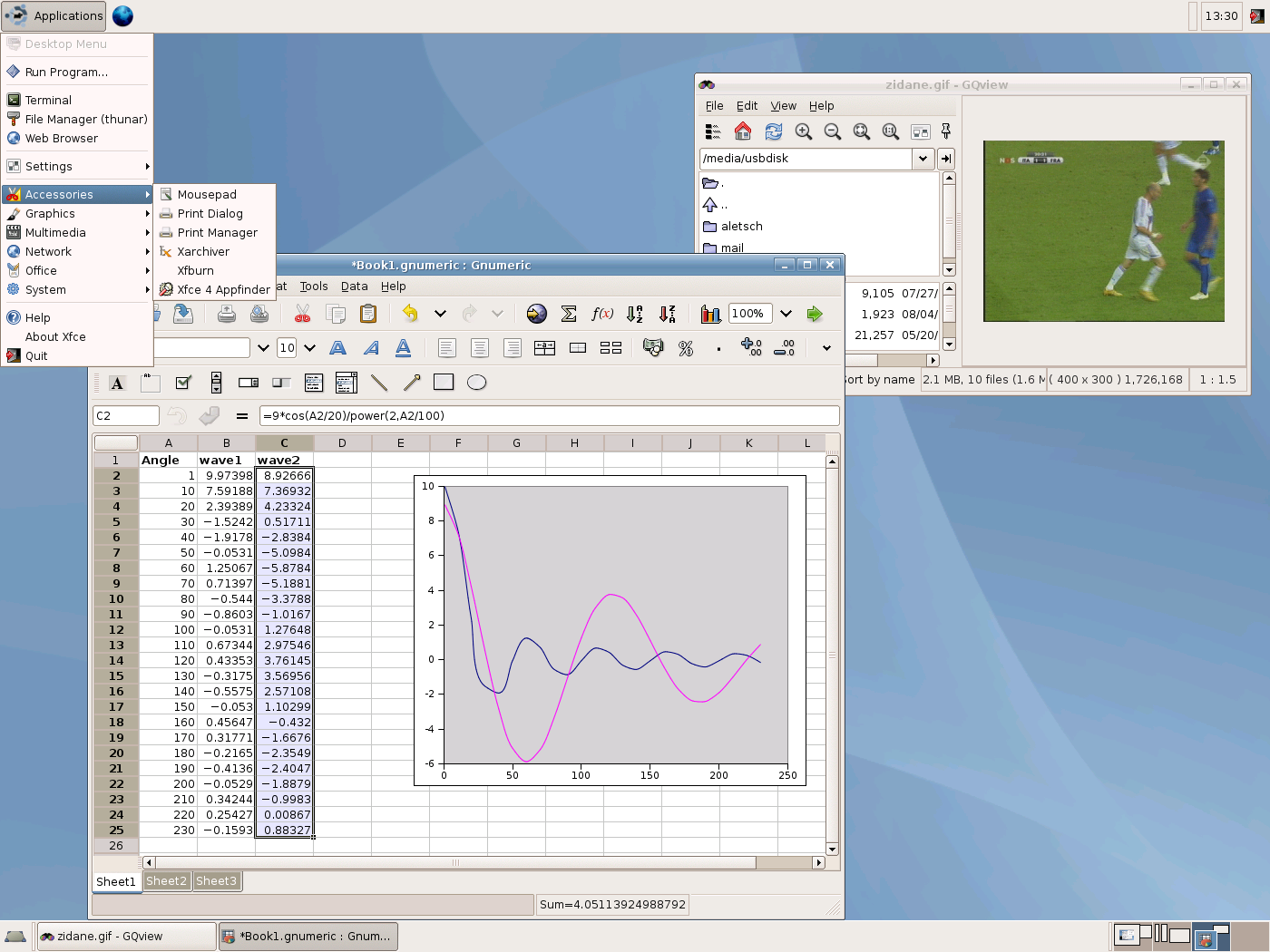 You do get Gimp 2.2, which was used to make these screengrabs, but you don't get the big bulky OpenOffice suite. Instead you get lighter variants, Abiword for word processing and Gnumeric for spreadsheets. In reality even these two provide much more than most users need, and they're quick and easy to use. You also don't get any games, or toys. However, despite the carefully selected, lightweight applications included here, the iso still manages to be almost 650MB - I can only assume they're using a lower compression than other live distributions.

Encouragingly, the network worked straight away, and Firefox was happy browsing the internet. My USB stick was also automatically recognised and mounted for me (as /media/usbdisk/). Even my camera was recognised and, although digiKam wasn't around to manage the tags, the file manager thunar was able to show thumbnails and allow copying of pictures.

First impressions are important, and this release looks good and feels good. It doesn't take an age to load each application, and everything hangs together really nicely - they've done a good job of integration and testing. As expected, it doesn't provide every latest bell and whistle, but then that's not what this distro is for. As it is, it's got a good, no-nonsense mix of useful applications and a clean and functional desktop.

It can do web surfing (Firefox), it can do email (Thunderbird), graphics (Gimp), office stuff (Abiword and Gnumeric) and basic image and movie playing. It can play wavs and oggs straight away, and I assume (but didn't try) that mp3 decoding is also available as an extra download. In short, it covers the basics and is easy to use.

Speaking of extra downloads, Xubuntu as a Debian-based distro has the synaptic package manager, which like urpmi makes the addition of extra software a breeze. With two caveats- firstly this is a live CD so if you get a new package and then reboot, you'll have to get it again. You could use other tricks to download and keep the packages on a local media, but if you're going to that trouble then you might just as well make a full install of Xubuntu rather than using the live version. Secondly, the point of Xfce is that you don't need the bulky KDE infrastructure. If you use synaptic to get a KDE-based application, you're going to break that independence and probably find yourself downloading a lot of dependencies.

Having said that, I tried out synaptic with a couple of examples - firstly the Knoppix toy bb because it's just fascinating to watch and is a nice small download. Having succeeded so far, I then tried blender, the powerful 3d design package (chosen because it has its own gui toolkit rather than KDE). And that worked flawlessly too, downloaded and installed and available right away. Very impressive stuff. So even if the package choice offered by the Xubuntu live CD is rather small, synaptic is there to let you add other packages should you wish.

Hard drives aren't automounted, so like Ubuntu it requires (for example) a sudo mkdir /mnt/hda6 and a sudo mount /dev/hda6 /mnt/hda6 to get read access to a drive. And again (always with this laptop) it needs the 855resolution patch applied to the Bios to allow the native 1400x1050 screen resolution. After mounting the Mandriva drive then it's a sudo /mnt/hda6/usr/share/855resolution/855resolution 3c 1400 1050 and then a Ctrl-Alt-Backspace to restart the desktop, before the proper, nicely sharp resolution can be used.

In Xfce, the top borders of windows can't be resized, which is niggly, but you can hold down Alt and do a right-click-and-drag to drag any window edge, which is a bit awkward but handy. Mousepad tapping is by default enabled (which is slightly annoying), but vertical scrolling is on (great!) and horizontal scrolling is off (great!). The keyboard 'start' button doesn't work, but you can get to the program menu either from the topleft of the screen as normal, or (handily) via a right-click on the desktop.

Lastly, some very minor niggles. Although it can play wavs and oggs out of the box, it can't play mp3s (presumably an extra plugin download would fix this, although I didn't try). And there's no battery meter that I could find.

Whether it's because of the "X" in the name, or the 6.06 instead of 5.10, this CD seems to have solved the speed problems plaguing the last Ubuntu release tested here. It's still live CD speed, but it's no longer embarrassing.

Overall these are quite respectable times, it's not blisteringly fast considering it doesn't have to load the whole KDE kaboodle like Knoppix does, but it's very much on par with both Knoppix and Elive. And needless to say, a great improvement over Ubuntu Badger.

Overall this Xubuntu left a very positive impression, much better than Ubuntu Badger. As stressed above, it's a deliberately limited distro aimed at the low-spec market, and as such it succeeds very well. It's easy to use, clear and friendly. And the full installer (which I haven't experimented with!) is built-in, should the impression be positive enough.

So if it's easy to use, capable of running on older hardware, fully supported by the Ubuntu community, with patches and updates from the Ubuntu "Long Term Support" branch, and it's free, could this be the answer for the upgrade of those expired OSs? And if so, will those users then migrate up to Ubuntu (with which they'll then be familiar) for their next set of hardware?

It'll be interesting to see.

The main site for Xubuntu is at xubuntu.org and more general Ubuntu information (including Kubuntu and Edubuntu) at ubuntu.com. There are also a few Xubuntu links at Wikipedia.