Even though I've got a full Mandriva system installed, there are a couple of reasons why I was curious to try out the Mandriva One live system. Firstly, it's a newer version, because my installed system is still the 2005 edition, and this Mandriva One is based on the 2006 edition. So there's a newer version of KDE, newer versions of some applications, and possibly other new goodies. Secondly, I've never seen a Mandriva live version before, so I was curious how they have managed to implement the system detection and live features. That gives a fairer comparison with the other live distributions tested here.

Strangely there's no official torrent available for the Mandriva One CDs, but there are several ftp links listed on mandriva.com's download page, so as long as you can keep plugged in for the whole (660 MB) download then it should be ok. Both Md5 and Sha1 checksums are available to check that the downloaded ISO is ok before burning. I burnt it to a CD-RW with K3b (as an image, as before) and then booted.

First impressions are not great. Firstly, at least on the two trial machines here, the boot displays several red FAILED messages which don't inspire confidence. Then the boot takes far too many clicks, selecting language, offering a licence agreement, selecting keyboard and time zone and even asking whether the hardware clock is set to GMT (?) before finally starting KDE. Then, a horrible blaring jingle on KDE start, which is embarrassing as well as annoying. But it seems to start fine, eventually.

Next thing is resolution - this laptop always requires the 855resolution patch to get its full 1400x1050 resolution, but MandrivaOne defaulted to 1024x768 which is a little low. Oddly, a restart of X after applying the patch didn't fix the resolution (as in other live distros) and I had to actually manually edit the xorg.conf to get it to accept the higher resolution. On the desktop PC it used a default of a measly 800x600 even though 1280x1024 should be available, and again only an edit of xorg.conf could persuade it. 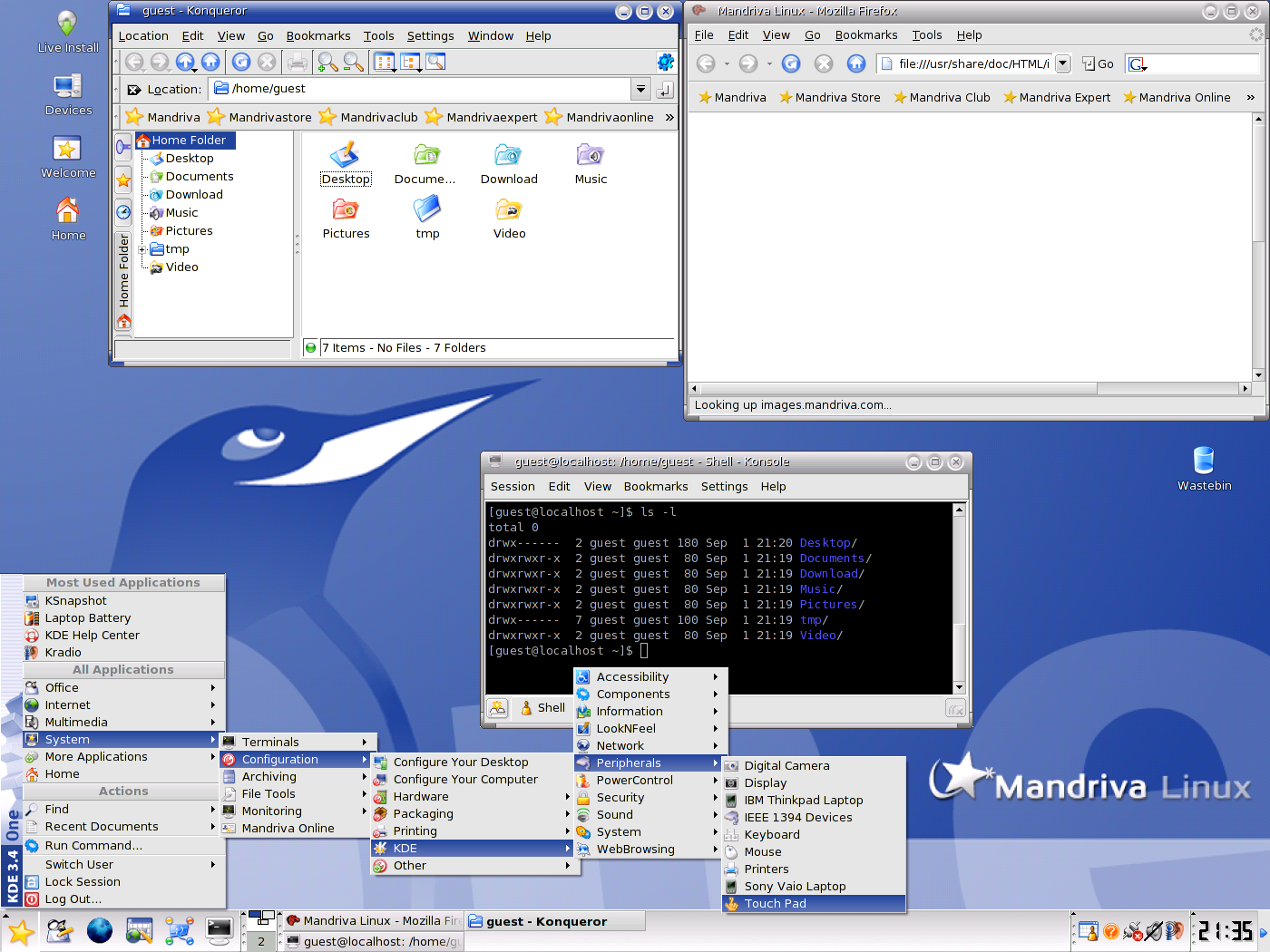 Those who were expecting something radically different from Mandriva 2005, or even from Mandrake 10.1, won't see anything immediately. There's a wannabe-heroic penguin gazing boldly upwards, the familiar 'Galaxy' theme, and the deeply-nested KDE menus from before (although this time using KDE 3.4.2). There are the familiar applications like Open Office, Gimp, Digikam and Firefox, but all minor upgrades since 2005. Kate is at 2.4.1 instead of 2.3.2, but still has the same find/replace bugs as before.

I did find a new application, Kradio, but it gave an error message at startup (preset file not found) and didn't offer much assistance. Examining the KDE help centre for more information, it seems that each application has two entries in the list, but absolutely no information about any of them. Slick. Amusingly, the home page for Firefox tries to show a Mandriva welcome page, with links to mandriva.com, mandrivaclub.com and so on, but the included style sheet sets all the links to display:none so all you get is a white window. Very slick. Does noone test these things? In this case it uses javascript to attempt to redirect to an online (non-blank) page but of course that only works if the network is connected.

Well, it's nice and blue. And, erm... the applications are nice, like Firefox and Gimp and so on. Digikam is older than what I'm using with 2005, but I did compile that myself. The USB mouse / trackball work fine, and the USB stick works too (after a manual mount as su). You have to manually mount the hard drives too. But most things kind of work, more or less. It's really nothing to get too excited about, however.

I tried it again on a desktop PC and during the boottime clickfest I specified a Swiss keyboard (which was true, actually!). Except once up and running KDE, it was using all US keyboard settings!! So what's the point of asking if it goes ahead with US anyway?? I set it manually using keyboard layouts and added British and Swiss layouts no problem, so the definitions are all there - it just seems to... ignore what is entered at boot.

There was no battery meter by default, so I tried to add one - the error message was decidedly uninspiring. It mentioned that ACPI seemed to be only "partially installed" and suggested I recompile the kernel. Erm... no thanks.

I tried using the "add software" function to see if I could download more applications for it (as I had with Xubuntu's synaptic), but here the program lists are all empty, so I was a bit stuck. Presumably I would need to use easyurpmi to add some servers to the configuration, but there was nothing to tell the newcomer how that's supposed to work. It just looks broken.

This is certainly not one of the speedier distributions under test here. In fact, if it wasn't for the laggardly Ubuntu 5.10, this Mandriva One would be the slowest of the lot. As it is, it's not unbearably slow, but it doesn't feel optimised for a live distribution and requires lots of extra clicks everywhere which get tiresome when it happens for every boot. It's not the only distro to require extra clicks for Gimp, to setup the temp directory etc, but even when starting OOo Calc it asks for the default file format. And the number of questions asked during boot is unprecedented.

So from a speed point of view, it's decidedly unimpressive. It certainly works as a live distro, but you can tell it's not the main purpose.

So it's not flashy and new, it's not quick, and it's not particularly special in what it offers. It's a bit flat, actually, quite conservative, quite plain, and just a bit... dare I say it? dull? It depends what you expect, of course, and for someone used to Mandriva there shouldn't be too much new in a Mandriva live distro anyway - but I'm used to a 2-year-old Mandriva edition so I thought I'd see some new stuff.

Overall there just seem to be too many problems with this version, none of them really crippling but each one adding to the feeling that it was just 'knocked together'. Other distros had live editions, so Mandriva felt they needed one too - well now they have one but there are niggles with it. Maybe the 2007 version will benefit from the extra testing time, to iron out some of the wrinkles in what should be a flagship demonstration.

The Mandriva home page is of course mandriva.com, and they have a section about this live version Mandriva One.