After trying out Knoppix (using KDE) and also Ubuntu (using Gnome), there's an interesting alternative window manager called Enlightenment, also known as "E", and it has its own dedicated live CD called Elive. At the time of writing it's at version 0.3, and this live CD offers an easy, risk-free way to see what is currently available (and what the developers are working hard on to improve).

I had already tried (unsuccessfully) to compile the Enlightenment source for Mandriva to try it out, although I was unsure whether this laptop was up to the job of rendering all that eye-candy and special effects that are part of the Enlightenment experience. It also has a reputation for innovation though, with lots of novel and interesting ideas being developed into a unique system. So here goes. If trying it out is a success, maybe I can find a way to switch Mandriva to use Enlightenment instead of KDE, or maybe I can transfer some of the ideas at least.

Note: for the recently-released version 2.0 "Topaz", see the elive 2.0 review.

As with the other live CDs here, trying these systems out is a simple 4-step process. All you need is a network connection, a bit of patience, a CD-writer and a fresh CD. First step is to download the CD image, then checking it to make sure it's ok, thirdly burning the CD image onto a CD, and finally booting from the CD.

For Elive, I did the download via BitTorrent because it gives an efficient way to download large files by splitting them up into lots of small pieces. The download can be paused and resumed whenever convenient, and the downloaded pieces are also shared with other people who are also trying to download them. Simply go to the Elive home page at elivecd.org and select to download version 0.3 via BitTorrent - the BitTorrent GUI should start up and begin the downloading. On the web page there should also be an md5 checksum given, which you can use with the md5 checker jar (see the downloads page) to check the final iso once the download is finished.

If it passes the md5 check (as it should since the BitTorrent client should also check each downloaded file segment), you can burn the image (always making sure to "burn CD image" not just burn the file onto the CD!) using K3b. Now just reboot and select to boot from CD. 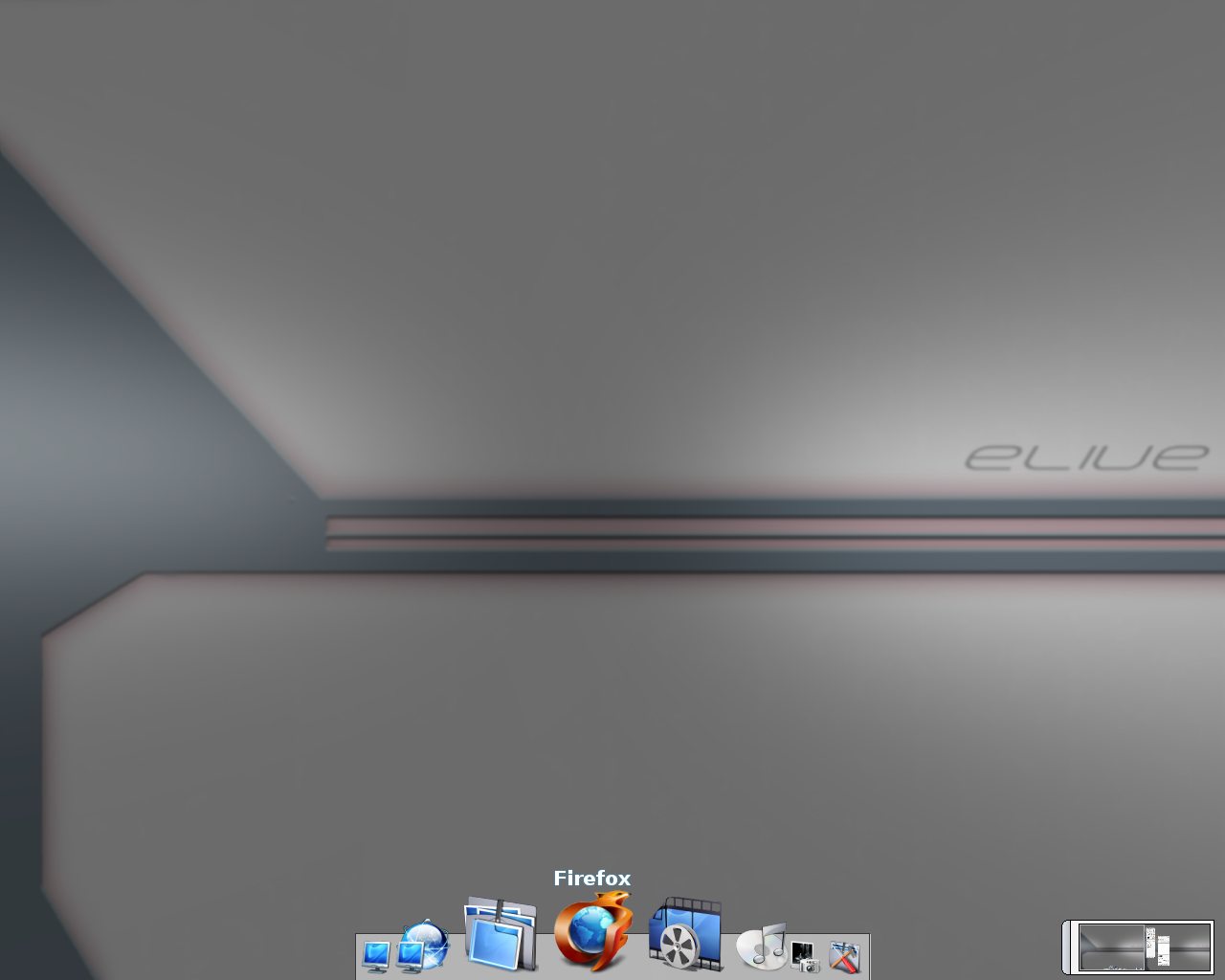 The opening boot screen gives a few basic language choices and boot options, and then after a relatively fast boot you get the choice between E16 and E17, two versions of the Enlightenment system. E16 is the old, stable and well-tested version, and is shown in the basic screengrab to the left. E17 is the newer, slightly more risky, slightly less polished but more experimental version which is still under "heavy development". Both have a great, stylish look, with common features but E17 is perhaps more interesting to look at and try out.

This screenshot shows E17 with its beautiful background and fairly minimalist set of screen accessories. There's no taskbar here, and there's no start button, just the "kicker" bar for launching a few applications at the bottom, a few "modules" for CPU frequency, clock, temperature and battery in the bottom right, and a "pager" bar in the top-right to show the 4 virtual desktops. The rest of the menus are accessible via a left- or right-click on the desktop background (as shown in the middle-left of the screen). The Start button doesn't activate these menus though.

Among the applications shown here are Eclair (a media player, top-left), Evidence (the file manager, top-middle), a couple of Eterms (consoles, left), OpenOffice Writer (version 2.0, bottom) and Entice (a picture viewer/editor, middle-right). The pager (top-right) shows if you look closely that this is the first of the four available virtual desktops, with Firefox running in the second, and Gimp in the third. Switching between desktops is done by clicking on the pager or by simply rolling the mouse pointer off the screen to the left or right. Odd, but neat.

Lots of the applications which come with Enlightenment also display a penchant for the letter "E", so here we have Eclair, Entangle, Entice and so on. For a file manager there's no Konqueror or Nautilus but instead Evidence. And instead of KWrite or Gnome-Edit there's Scite. But of course there are many applications which are common, with familiar favourites such as Gimp, OpenOffice, Firefox and so on. So it should be possible to take any distribution (not just a debian-based one like this Elive), select Enlightenment instead of KDE or Gnome, and continue to use many of the same applications as before.

Overall it feels smooth to run, and includes many not-too-overdone effects like the gold highlighting of menu items, as seen for example in the Alt-tab application-selection popup: 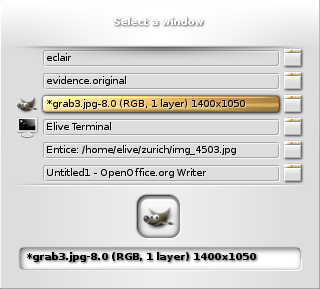 The animated desktop backgrounds demonstrated here are reined in to subtle star-twinklings in the sky, but this could be a slippery slope to full-on screensavers in less restrained hands. As with all linux distributions on this laptop, everything looks even better after the 855resolution patch has been applied and the window manager restarted. For Elive this also requires the activation of a module called Randr, which then gives a menu option to change the screen resolution to the full 1400 by 1050.

The applications included in the Elive CD cover a range including media players, the Firefox browser, and the whole OpenOffice 2.0 Suite (although under E17 the menu items don't launch properly - you have to run oocalc or oowriter manually). Also included is the 3d drawing and rendering suite Blender, the graphical editor Gimp and a text editor called Scite. Some of the menu items don't work, for example Inkscape and Nvu. There is no standard screen-grabber application like ksnapshot or gnome-snapshot, so the grabs above were made with the one in Gimp instead.

First and foremost, E looks fantastic, especially E17, and after a bit of getting used-to it works wonderfully. Despite the warnings about E17 being unstable and potentially unreliable, lots of things work and it didn't crash during testing. It feels minimalist yet function-rich, and doesn't go over the top with the flashy effects. It has many innovative effects, but somehow still manages to remain speedy without chugging to a halt.

The multiple desktops are a really neat feature, ideal for keeping lots of applications open and switching between them effectively. You can simply roll the mouse off the right-hand edge of one desktop, and reappear on the left-hand side of the next screen, showing all the applications as they were when you left them. You can drag applications from one screen to another, and switch between screens with the pager app or with keyboard shortcuts (Alt-F1 to Alt-F4 select each of the four desktops). It takes getting used to, and it can be unnerving when you switch accidentally, but it's cool.

Other good points about this Elive release, the network works without any configuration, and the hard drives are already nicely mounted and ready for use. And Eclair is simply the best-looking music and media player around.

There was an initial worry that all the eye-candy and whizzy effects would slow things down even more than Ubuntu. But it's fast:

In summary, this is very positive, with a fast boot time even compared to Knoppix. Both OOo Calc and Gimp require some extra clicks the first time they're run to configure and set up the applications, which make the starts seem rather long. However, they both start in less than 5 seconds for subsequent runs.

First of all there's no sound, or at least none that I could get working from any of the applications and media players. Secondly, the meter module which should display the CPU frequency doesn't work, and gkrellm doesn't display it either. The battery meter makes an extremely pessimistic estimate of the remaining time, but I haven't tested if it's accurate.

Other minor issues are simply the getting used to the way things work - alt-F2 doesn't run a command, and alt-F4 doesn't close the active window. Flicking accidentally between desktops is also frustrating when you're trying to manoeuvre around the edges of the screen. Menus are also awkward near the screen boundaries, as they tend to disappear off the edge unless you navigate up and down with the keyboard. Mouse action in general is a little erratic, and resizing windows by dragging the top border is not possible.

A brilliant window manager system, with a pair of impressive and innovative versions to choose from, wrapped up in a competent and high-performance live distribution. The hardware recognition worked great, the speed and smoothness are dazzling, and there's a good range of applications. This stylish system looks fantastic and although still development code, belies the modest 0.3 version number. Which is as it should be.

It's a great way to see and experience the Enlightenment system and find out what it's about. The enthusiastic and industrious band of developers have built something very interesting here, it's definitely worth a look.

I've so far been unsuccessful with attempts to bring E to Mandriva (via source compilation, rpm download and also via urpmi), but Elive gives an easy way to try it out and I look forward to seeing more of E in the future.

The home page of the Elive project is at elivecd.org, which gives more information and of course the downloads. For more about Enlightenment itself, see enlightenment.org and get-e.org.

Note: Since this review was made, the author of Elive has changed his policy and now only allows download after making a financial donation. I'm not sure of the legality of charging for downloads if they include GPL'd software, but that's what he's decided. It's possible that future releases will remove the requirement to donate money to use the live CD. There are torrents available of the 1.0 release but it's not clear whether they're exactly the same as the elivecd.org version or not.

Also, another new version of elive has now been released, see elive 2.0 for more details.