Yes I know I only recently wrote about Mandriva 2006, and I know that 2007 at the time of writing isn't officially out yet, but I had heard some interesting comments about the forthcoming 2007 and took the opportunity to try out a test version from a live CD. Although I skipped the full install of the 2006 version because it didn't offer much new, it's becoming time for an upgrade so this is a sneak preview on what's coming.

Again this is an ftp download rather than a torrent, but there are many mirrors available worldwide so the download is quick and efficient. I'm looking here at release candidate 1, codename "Mona", which comes in a variety of flavours (14 different live CDs!). They have different desktops and different language combinations on offer, I chose the western europe edition using KDE.

Of course, I checked the Md5 checksum (and the sha1 too for giggles) before burning to CD-RW, and then booted from the CD.

Some things haven't changed since the 2006 One editions. There are still some worrying red FAILED messages on boot (mount not available?) and still a large number of clicks required, selecting language and country, accepting the licence agreement, selecting keyboard and time zone and even specifying whether the hardware clock is set to local time or not (?) and then an extra click to select the 3d features - none, Aiglx or Xgl. We'll come back to those options shortly. Sadly, the horrible blaring jingle on KDE start is still there too.

The first view of the desktop is interesting - no more conservative dark blue, but instead a bold, (garish?) orange. Maybe they're taking colour advice from Ubuntu. Interestingly, this is the first distro I've tried which didn't require a manual 855resolution patch to enable the full 1400x1050 resolution - and the reason is that a patch called 915resolution has already been executed for me. The full resolution is still not available, even from Configure Desktop, but once I run XFdrake (as root) and change the display to a Generic 1400x1050 panel, then after a dodgy-looking screen-reset it's happy running the native resolution.

So what's new? A new KDE (3.5), updated Kate (with at least one nasty find/replace bug finally fixed), a new Gimp (2.2) and of course OpenOffice and Firefox. When starting Firefox, the blank Mandriva welcome page from 2006 is now gone, replaced by a "File not found" error message instead. But that's probably just a build problem with this RC1. The help entries are still doubled, and still empty, and the urpmi entries are still not there by default.

On the plus side, the battery meter works, it plays oggs and mp3s, and the basics work just fine, including the network, the trackball, the USB stick and (after manually mounting them) the hard drives.

So it works, and has the basic applications (but surprisingly few, and absolutely no games or toys to tinker with). But the most interesting bits are yet to come. As mentioned earlier, there is an extra panel at boot offering three choices of 3d effects. Obviously I chose "None" first time in just to try things out, but with a reboot and selection of the second option "Aiglx", we get some new toys to play with. 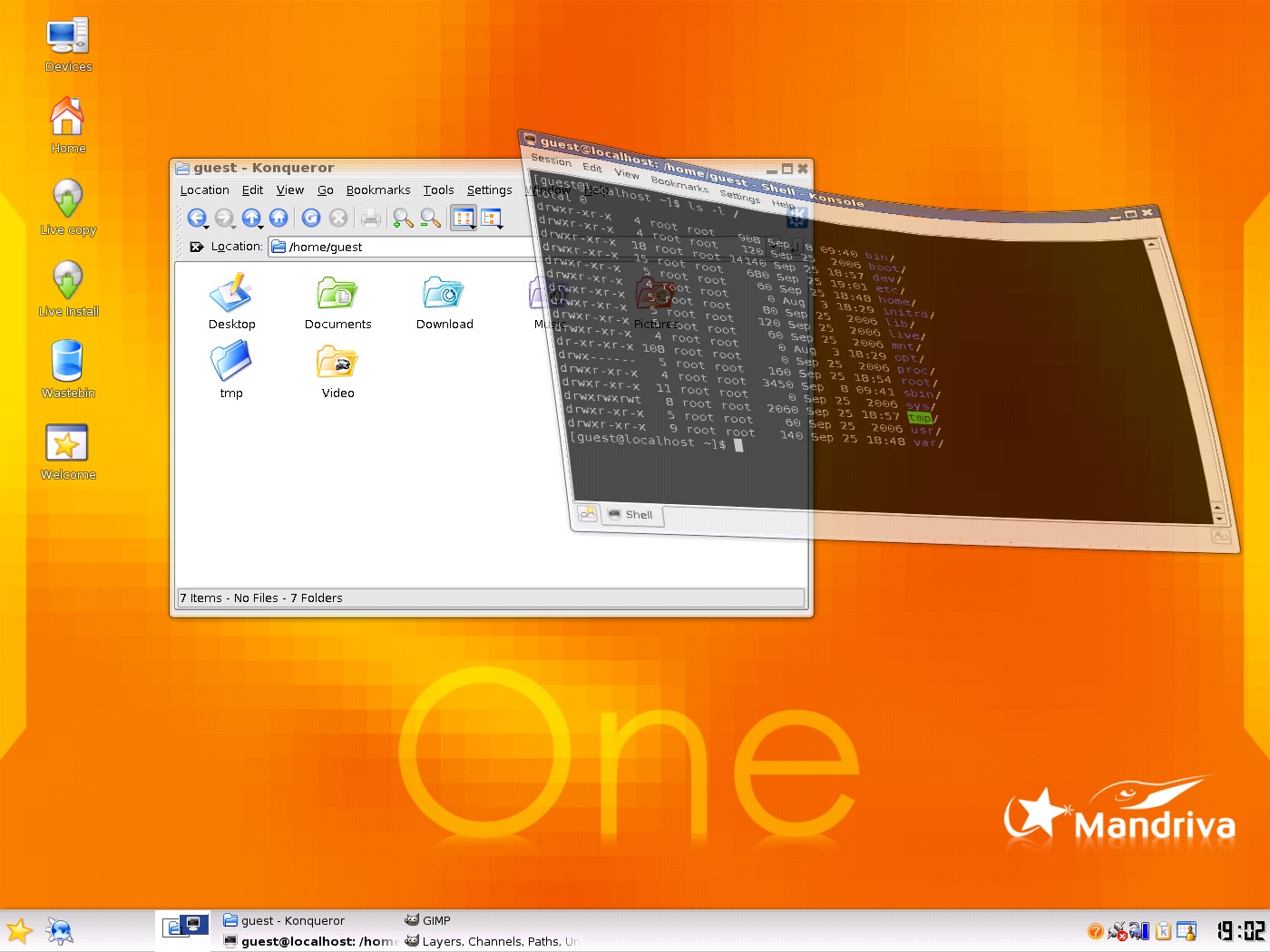 Firstly, you get wobbly windows. Move a window with the mouse, and instead of staying rigid it behaves like it's made of jelly, wobbling to a standstill. Yes it's useless but it's fun. Maximize a window and it 'pops' to fill the screen. Drag the title bar of a maximized window and you have to 'pull' it from its stuck state, until you pull too hard and it 'pops' to a wobbly non-maximized window. The menus and dialogs also wobble slightly. Yes, it's a bit silly.

There's an irritating feature when the mouse slides into the top right corner of the screen (just where you want it to be to close a window) - that's a magic trigger to rearrange the windows of the current desktop to let you select one. I really hope this is switch-offable on a full install because it's really annoying. 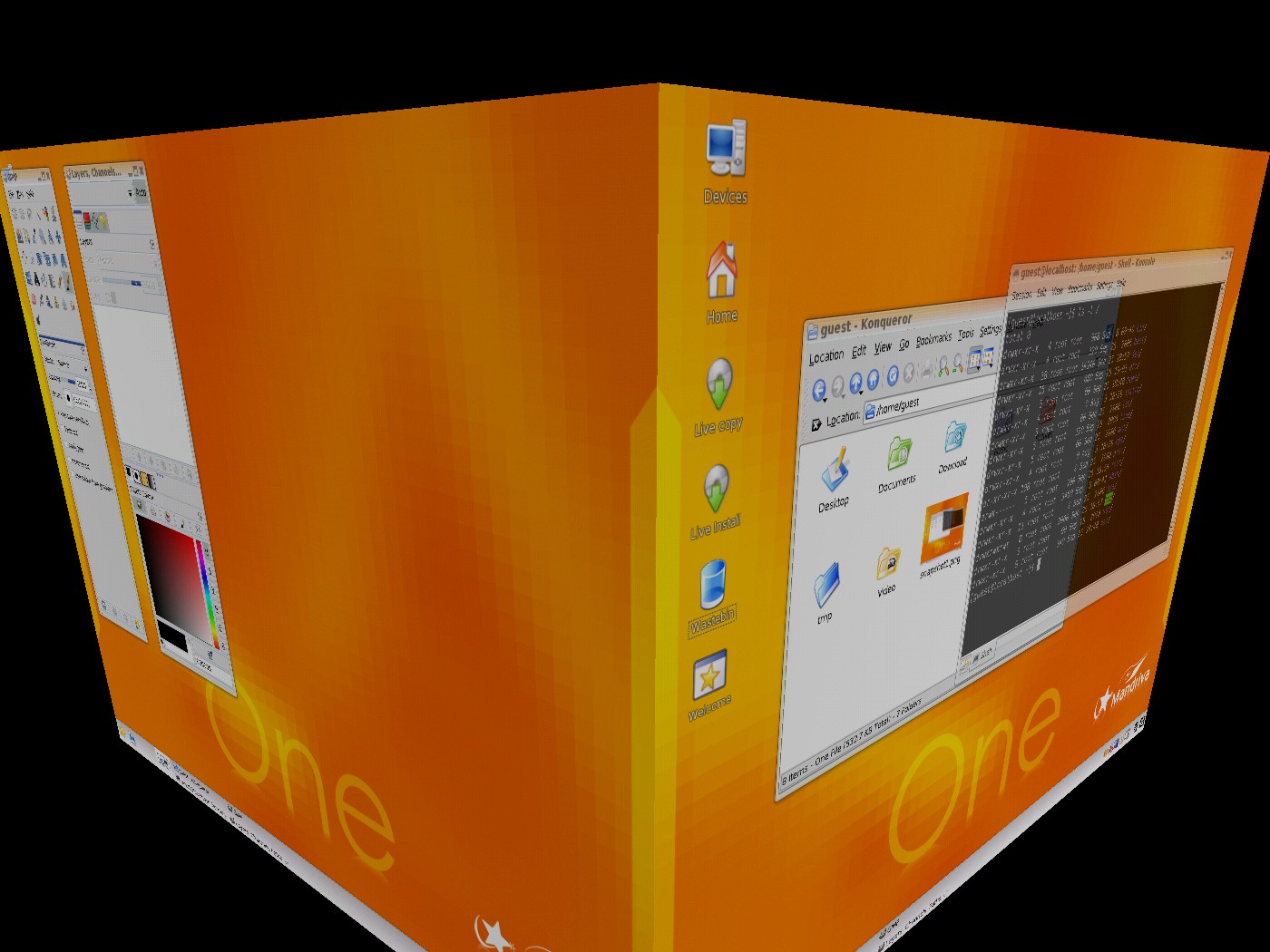 Next, you get transparency effects. You can take a console window for example and turn its opacity down so you can slightly see through to the windows or background beneath. Yes, that's also a bit frivolous.

Finally, you get four desktops. Nothing new perhaps, this has been available in Knoppix, Mandriva and more interestingly in Elive. But here using Aiglx the four desktops are arranged on four faces of a cube, and you can rotate the whole cube to see the different faces. You can slide windows from one face to another, you can unwrap the cube to see the faces as a filmstrip and select a different one, you can even grap the cube and spin it round in 3d. There's even a nice Mandriva logo on the top face of the cube. And everything slides around really smoothly, without jerking or apparently overloading the machine. In fact this laptop's fan only kicked in to cool things down when I stopped playing with the Aiglx stuff and the (rather nasty) screensaver started.

There should be a zoom feature as well, but on this Mona release it doesn't work as advertised. Maybe the key bindings are not quite set up properly.

Remember this is only an RC1 version, so maybe things will be different for the final release, but here's a preliminary guide:

It's slow to boot (almost as slow as Ubuntu!) but once it's going it runs fairly responsively. Sometimes it fails to shut down cleanly, just hanging after the CD is ejected, and sometimes it goes into a restart automatically.

This looks to be a release worth waiting for. Updates to the KDE, updates to the applications, and the interesting Aiglx stuff. I'll probably wait a few weeks for the teething problems to be identified and fixed, but there's plenty here to look forward to so I'll be upgrading my trusty 2005 after it's officially released, probably in October.

The Mandriva home page is of course mandriva.com, and their download page offers a variety of (now officially released!) torrents for 2007. This includes live One versions, plus CD- and DVD- based installable versions.