top | trying it out | applications 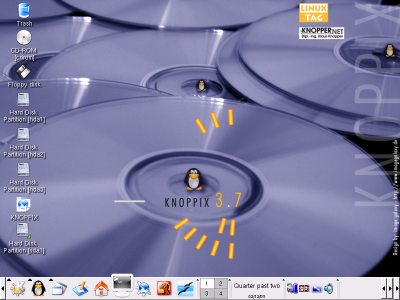 Having successfully booted Knoppix, this snapshot gives an impression of what you'll see, although this example is a little cramped to make the icons visible on this small picture. You may recognise the shortcut icons on the taskbar for the Mozilla browser (the red dragon) and for the OpenOffice suite (the seagulls). The "K" button in the bottom left-corner is the main application menu, which leads to a variety of submenus - ideal for clicking around and exploring what's there.

Going back to the icons on the left of the screen, they lead to the disk partitions and devices which Knoppix found when it booted up. In this case it found 3 hard disk partitions, and gave them the curious names hda1, hda2 and hda3. It also found a USB stick and named it sda1, but oddly also called it a hard disk partition because it is handled in the same way. hda2 turns out to correspond to the C:\ drive of the installed OS, and hda3 to the separate partition called E:\ - by clicking on these icons a file window pops up and allows the browsing of the directories. However, as discussed earlier these directories are read-only because they were formatted with NTFS, which Knoppix can read without problems but attempting to write would be (probably) asking for trouble. By default they're set to read-only already, so it's quite difficult to accidentally wipe out your files.

Apart from the taskbar application shortcuts (for the Konqueror file window, console terminal, Mozilla and OpenOffice), most of the applications are accessed via the "K" menu in the bottom-left of the screen. Opening this menu gives a host of programs to choose from, all ready to use after a short delay reading and decompressing from the CD. Some of the more useful and/or interesting ones are listed here according to where they appear in the menus:

As an illustration of what Knoppix looks like with some applications running. 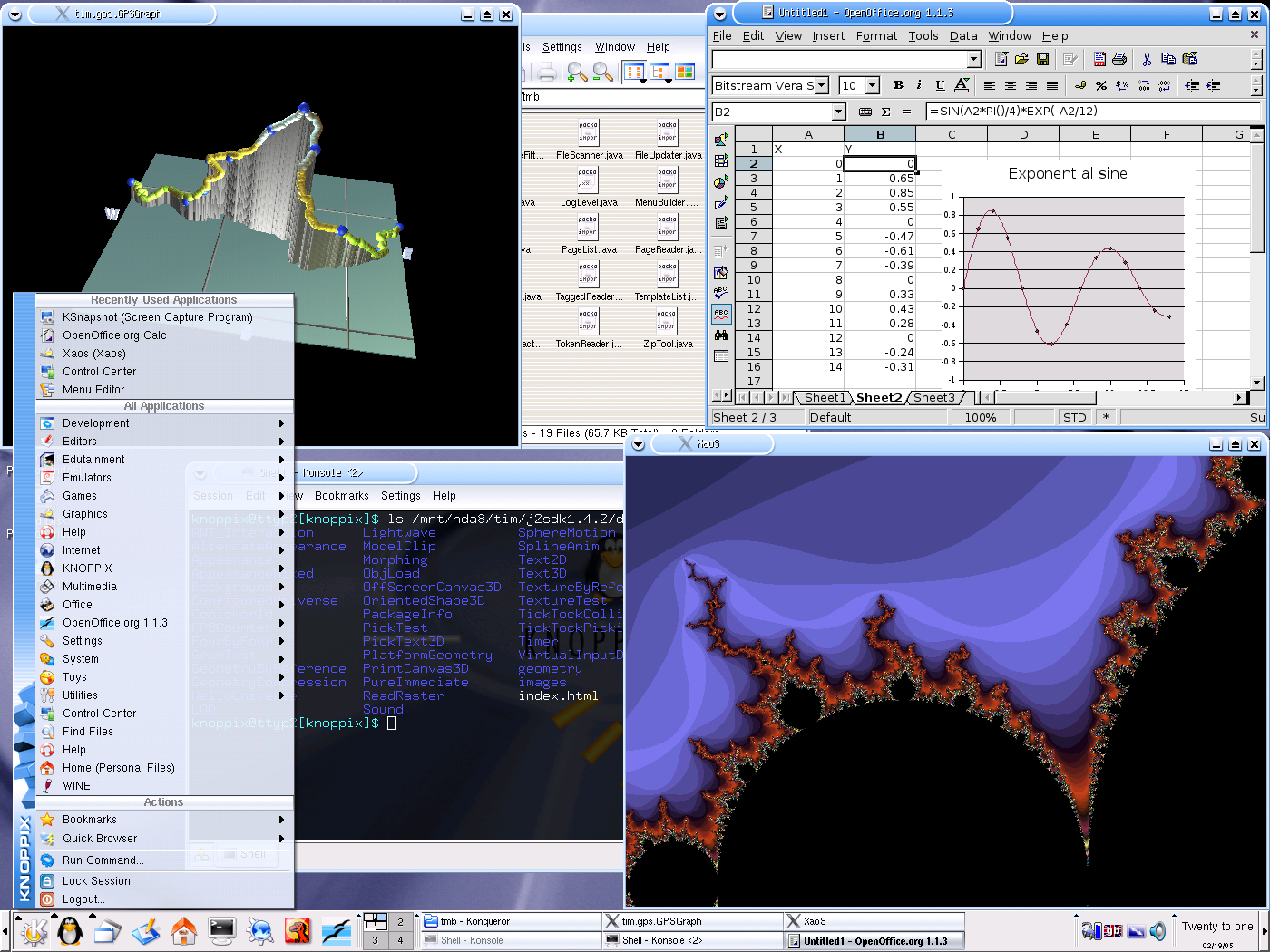 This snapshot shows Knoppix 3.7 running with a variety of different things going on. In the top-right is OpenOffice 1.1.3 (the spreadsheet part called Calc), with an example of formulae and drawing charts. Those familiar with doing this kind of thing with other spreadsheet programs will find it very familiar. In the top left is a Java application window drawing pictures using Java3d extensions (note these don't come with Knoppix but can be easily added). Bottom right is Xaos, showing a part of the Mandelbrot set. You can't see the fluid zooming here but it's cool. The file manager type window in the background is Konqueror, and the black window with text in it is a console session. The K menu is also expanded to show what's available there.

Interesting to note is the transparency effects on the K menu and on the console - a fairly simple effect but it gives a nice feel.

Here are a few timings made on this laptop, using Knoppix 3.7 starting from a cold boot and with mains power. This will let us compare the performance with other live CDs like Ubuntu, Elive and Mandriva One in the live distros section.