I was quite happy with the 2005 edition and after trying out a live cd of the 2006 version I wasn't impressed enough to make the upgrade. It's good to have a stable system for a while! But then 2007 came out promising 3d wonders and significant updates to a lot of the applications, so after trying out the live cd, I attempted an install.

I'd tried out a beta release of the live "One" cd (see the live review) but when it comes to installing it, I wanted to make sure I had the real deal. So I downloaded another cd, this time an officially-released install cd. Crossing my fingers, I booted from this and it seemed to do the upgrade ok, asking lots of questions in a text interface as shown below. 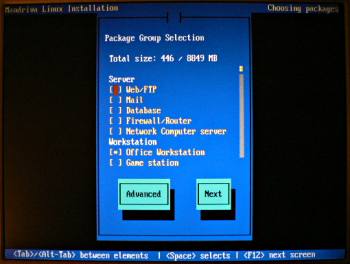 It asked everything about the partitions, about the language and keyboard settings, the time zone and users and passwords and graphics configuration and and and... and then finally it was ready to reboot. The boot screen looked promising (a big improvement over the starry-eyed penguin from 2005!) but on trying to boot the new system I couldn't get any X ("no screens found") and couldn't get any network connection either. So I was a bit stuck, being unable to update my packages to fix the problems and not even being able to search the internet for the answers. After a lengthy struggle trying to manually edit the xorg.conf file using vi, I eventually had to admit defeat and start again. My only option now was to try the beta One cd and hope that I could upgrade everything after install.

The second attempt started by booting the One cd, and selecting the convenient "Install" icon on the desktop. I was hoping that if One can manage to configure X properly and find my network, then it should be able to install all that stuff too. And certainly the install process managed to provide a point-and-click gui for choosing the install settings, rather than text-and-keyboard screens as before.

Much the same questions were asked, and again I specified to format and overwrite my root partition but keep my home partition unscathed. Except this time after rebooting I had both X and a network connection, and things seemed to be working fine, albeit a bit orange.

Of course I immediately set up my urpmi sources using easy-urpmi and did an update to grab the latest packages. There was a lot to download, but that all went smoothly too, and I had my 2007 system complete with 3d whizzes! Of course I also had to add a lot of packages which weren't included on the cd, because my root partition had been formatted and all the information about which packages used to be installed isn't there any more. So I had to reinstall java, and all the other additional bits too.

Well, the result is all the 2007 goodness, including updates to almost all packages - the Mozilla browser has now been replaced by Firefox, OpenOffice is much improved, Digikam is better and so on. The 3d stuff is very very cool, and especially fun to demonstrate to people, it's really impressive when you see it for the first time. But I had a few awkward system hangs with certain applications and I wasn't sure whether they had something to do with the (still new) 3d stuff, so I disabled it and returned to my 2d world. Unfortunately the intermittent crashes and seizures persisted. So I got a double-edged upgrade, lots of new stuff to play with but some new and rather irritating problems.

Obviously the system crashes are the worst problem, locking up the entire machine and requiring a finger on the power button. This happens intermittently with some games, sometimes with Firefox, often with Povray, and repeatedly with Java3d applications, and every time all unsaved data is lost. Arg. And switching off the 3d stuff didn't help either.

The organisation of the add/remove programs tool seems completely broken, for example when looking at the tree of packages, you get multiple groupings with identical names (like "development" and "Development". And other repeated groupings like "Internet-Instant Messaging", "Network-Instant Messaging", "Networking-Instant Messaging" and "Applications-Internet". Finding what you want is therefore much more difficult. Similarly, the start menu is horribly complicated and overly-deep, for example the often-used menu entry to add software is reached by navigating through the menus System - Configuration - Packaging to find the entry "Install, Remove & Update Software". The often-used burning application K3b is only found after working your way through the submenus System - Archiving - CD Burning to eventually find the K3b entry.

Konqueror is an application I use a lot, even though the keyboard navigation always irritates me, but the layout of file and folder icons has changed for the worse in 2007. Whenever there's a remotely long filename, it can't wrap the filename properly and ends up putting all the icons out of line to make room. Worse, it can't find an icon to display for some file types (like .txt~ or .java) and instead of displaying some general icon, just displays no icon at all, making the items difficult to select.

Management of the online repositories also shows signs of weakness, as it seems that many applications just weren't rebuilt to conform to the new menu definitions. Therefore their menu entries are in the wrong format and even after installing the applications, there aren't any entries in the start menu or any clue how to find them. You can make your own menu entries of course, but at first glance it appears that the install hasn't worked. Also over forthcoming updates it happened more than once that an official update would break certain applications, and only another update several days later would fix the sudden and mysterious problem.

Another mysterious problem is the ftp clients being unable to connect to certain ftp sites. With 2005 it was no problem, but with 2007 all ftp clients (KBear, Kasablanca, gftp, Filezilla and the command line 'ftp') hang when trying to do a directory listing on certain ftp hosts. It must be some security setting somewhere (and something to do with active/passive ftp connections) but other live distros don't suffer from this problem.

There were also some other minor issues, like the failure to adjust the clock automatically for daylight saving time (even though NTP was activated) - the only way to fix it was to disable NTP (and 'apply') and then reactivate it (and 'apply'). Plus there were some worrying-sounding error messages on shutdown and some application-specific issues with for example Digikam and Gimp.

So all in all, not a dramatic improvement over the stable 2005 system, with enough niggles to make me look around at Kubuntu Feisty, among others. But then Mandriva suddenly changed their yearly release policy and announced a "2007 Spring" release very shortly. So maybe we'll see what that has in store...